Earlier this week, the government announced the elements of its £500 million package to promote ‘ultra low emission vehicles’ (ULEVs), by which it mostly means electric cars. They will continue to subsidise EVs by £5,000 each, will spend £100 million on R&D, £32 million on infrastructure like rapid chargers, and £20 million on ULEV taxis, amongst other things.

£500 million is a lot of money, but is it worth it, and is it enough to make EVs mainstream?

Well, as for whether it’s worth it, the government estimates the ULEV industry is worth £11.2 billion to the economy. I’ve no idea how that figure is arrived at, but I’ve been attending a lot of automotive events recently, and there’s no doubt that the global car industry is serious about EVs. And I think it’s fair to say that the UK has the engineering expertise to make it a major player.

A few years ago I was involved in a government funded programme to test EVs on the road. I worked with four UK sports car makers who were developing electric sportscars – the idea was to show what an electric car could do, and dispel the ‘milk float’ image. The great thing was that the market for sports cars is not so price sensitive, and has a lot of enthusiasts who want new toys, so these guys could develop vehicles with the latest motors, batteries etc and really show off the engineering.

None of those cars has made it into significant production, but that wasn’t the point. They showed that the UK has loads of engineering talent, they developed the state of the art, and they blew the socks off anyone who drove them! Fast forward three years, and in 2014 we have a couple of really interesting developments – on the track the FIA’s ‘Formula E’ series is finally happening in a big way, and on the road, the Tesla S is pushing the boundaries of what an EV can do.

A few weeks ago, I finally got the opportunity to drive a Tesla S (on a sunny day around the Silverstone track, doesn’t get better than that). This is a car with a 300 mile range, luggage space under the bonnet as well as in the back, and an option to have a couple of extra (foldaway) seats in the boot so you can seat seven people in it – so a pretty practical family car. However, it’ll do 0-60 mph in 4.2 seconds and beat an Aston Martin Rapide in a drag race – at Silverstone I flew effortlessly past all the other cars on the track. Tesla basically can’t make them fast enough, with every car so far pre-sold. 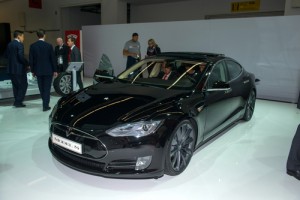 Tesla’s success brings me neatly back to the second question about the government’s £500 million plan to get us all driving EVs – is it enough? In Norway, in March, the Tesla S broke the all-time record for sales of any one model of car in any one month, getting 10.8% of all new car sales. And EVs in general got 20.3% of new car sales, with the Nissan Leaf and BMW i3 doing well too. That’s mainstream, so how did they do it? Well, they tax car sales heavily, but have zero tax for EVs, plus EVs are exempt from congestion charging in a number of cities, get free parking and free charging at a network of fast chargers all over the country.

So will the UK emulate Norway? Probably not just yet. Yes, we’re building a fast charge network, but the UK has more drivers and more roads to serve than Norway. Yes, EVs are exempt from the London congestion charge, but we really need to see congestion charging in a lot more places, and that’s proved politically challenging. But the real stumbling block is still price. GDP per capita is about 50% higher in Norway than the UK, meaning a lot more disposable income – allowing an £80,000 car like the Tesla S to top the sales charts.

Is this £500 million well spent? Spending money to create jobs is always a gamble by government, but if that’s the goal, I think the ULEV industry is a better bet than most. Is that money going to help us address our transport problems, especially climate change? Well, in the long term it will be part of the picture, but only if we get on with the other stuff that needs to happen right now, like building more renewable electricity capacity, changing travel behaviour and looking into other fuels for the vehicles we can’t run on electricity. I’m still waiting for equally serious commitments on those fronts…

Last week a cloud of Saharan dust swept across the UK, and as a result stories about air quality settled with similar ubiquity across the country’s media. As soon as we could see the choking cloud in front of our faces, we all wanted to talk about a problem that has in fact been with us every day for decades. No metaphor could have made the point more clearly that ‘out of sight is out of mind’. 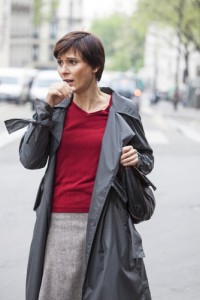 Just last week, the World Health Organisation (with perfect timing) released new data suggesting that one-in-eight deaths around the world can be linked to air pollution. There’s no need for me to re-hash arguments made very well in the better quality media last week (see John Vidal’s piece in the Guardian, ref below). The one thing I’d like to pick up on is just what all those people in the WHO data are dying of, and perhaps why we and our politicians seem incapable of seeing the problem except when it paints the streets red.

The media reports during an air pollution ‘episode’ like the one we just had invariably focus on coughing, asthma, stinging eyes – the sort of thing you’d expect. I saw one paramedic interviewed on the BBC saying, ‘Yes, we’ve seen a 14% rise in cases of acute respiratory illness over the last two days.’

The thing is, if you read the WHO report, it summarises the deaths linked to outside air pollution by cause, and this is the run-down:

That’s 80% caused by heart disease and stroke, before you get to the ‘obvious’ stuff, the ‘lung’ stuff. I’ll be honest and admit that it made me sit back and think. So I went looking for a little more explanation, and found some great references from the American Heart Association (hardly radical) and then the penny dropped, because they reference the many studies on second-hand cigarette smoke.

We all know smoking is bad for us, and we know that it massively increases the risk of heart disease and stroke, two of our society’s biggest killers. And we’ve enacted smoking bans in public places because we realised that inhaling smoke puts you at risk even if you’re not a smoker.

Step out onto the street in London, and the air may not be pleasant, but you’re not immediately thinking about people dying from it. You may well know someone with breathing problems, or asthma, but they probably manage it. But I’m guessing most of us have been touched by the death of a friend or relative from stroke or heart disease, and not necessarily a smoker. Was the air they were breathing the final straw? Quite possibly.

Our current controls on smoking have taken decades to enact, and smoking is regarded as much more of a choice than the presence of buses, trucks, taxis and cars on our streets. In the case of smoking, it took a culture change – the public had to internalise the evidence of health risk, and the politicians reacted (eventually) to that change, some of the braver ones even helped it along.

Action is being taken on air quality, but much too slowly (another post on that soon). If we want a quicker pace of change, I think one component will need to be a greater recognition of the true health impacts, and just how much the invisible cloud is affecting us, our friends and our relatives.

So here’s a thought – next time you step outside in a major city, look at the traffic and picture every exhaust pipe as a giant cigarette. I’m talking about a six-foot Gauloises, smoked by an elephant with a 200-a-day chain-smoking habit. See if that changes your perspective on air quality.

John Vidal’s piece in the Guardian:

Information from the American Heart Association: