In a year that saw the worst drought in decades in the US, the ‘food vs. fuel’ debate is highlighted once more. The corn crop has been badly hit, pushing up prices, so farmers are urging the government to drop the requirement to make ethanol from corn. However, the Environmental Protection Agency (EPA) has just refused (again – they also refused in 2008). 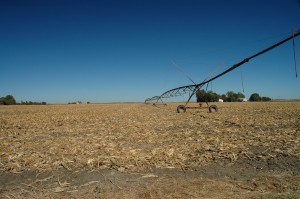 The interesting thing is that the EPA says dropping the ethanol blending mandate wouldn’t make any difference to corn prices. Which seems rather counter-intuitive doesn’t it? In 2007, a little over 10% of US corn was used for ethanol production, whereas now that figure is 40%. Surely that must have an impact on price?
Specifically, the EPA said:

“EPA examined a wide variety of evidence, including modeling of the impact that a waiver would have on ethanol use, corn prices, and food prices. EPA also looked at empirical evidence, such as the current price for renewable fuel credits, called RINs, which are used to demonstrate compliance with the RFS [Renewable Fuel Standard] mandate.

“EPA’s analysis shows that it is highly unlikely that waiving the RFS volume requirements will have a significant impact on ethanol production or use in the relevant time frame that a waiver could apply (the 2012-2013 corn marketing season) and therefore little or no impact on corn, food, or fuel prices. We analyzed 500 scenarios, and in 89% of them we see no impacts from the RFS program at all.”

To my mind, this is just another good example of how hard it is to draw a direct link between food prices and biofuels. That’s not to say I think using food crops for fuel is generally a good idea, just that I think looking at food prices is going to be a tough way to argue against it.

In a 2008 report, the International Energy Agency pointed out that estimates of biofuel impact on food prices can vary somewhat. They cited an estimate by the Council of Economic Advisors, who estimated that biofuels accounted for 3% of that year’s rise in food prices, compared to a World Bank estimate that biofuels accounted for 75%! The CEA had used only data on corn markets, and extrapolated it out to all food crops, while the WB had simply looked at the impact of oil price on food prices, and then assumed that all of the remaining increase was due to biofuels.

So, back to the EPA’s decision – how can they say that using all this corn won’t have an impact on price? Well, there are two broad reasons.

First off, they’re not really saying that using corn for ethanol doesn’t impact on price, they’re just saying that removing the Renewable Fuel Standard for this year won’t help. In fact, there are several other forces that determine how much ethanol is blended into gasoline in the US, such as:
• Ethanol has been cheaper than gasoline for the last few years
• Gasoline sales have been declining in the US, this year down 5% on last year, which means less ethanol is needed to hit the target
• Demand for ethanol is driven just as much by the Clean Air Act, which requires an ‘oxygenate’ to be blended into fuel to lower emissions of carbon monoxide, and ethanol is the cheapest oxygenate

The second reason is that although more corn is being used in ethanol, it’s compensated for in other ways. For one thing, that huge 40% figure doesn’t allow for the fact that the by-product of ethanol production, Dried Distiller’s Grains (DDG), is itself a high grade animal feed. Allowing for this, it’s actually about 27% of corn which is used for ethanol. For another, US corn exports have fallen by over half since the food price spike of 2008 because those high prices caused much more land to be put into corn production elsewhere in the world.

One final piece of the puzzle is the RINs (Renewable Identification Numbers). These are certificates that fuel companies get to show how much ethanol they’ve blended into their fuel. For the last few years, most fuel companies have blended more than they had to, because ethanol was cheaper than gasoline, so now they’ve got spare RINs, which they can use to meet some of this year’s mandate. Which means if the price of corn ethanol goes up, they can use RINs instead, lessening the RFS’s impact on corn prices.

So what do we learn from all this? Well, like I said, drawing a direct link between food price and biofuel policies is never going to be easy – there are a lot of different factors to take account of. But let’s face it, using all that corn for ethanol still sounds like a bad idea, in a year when the US corn crop fried and the European wheat crop was flooded. So what’s the real argument against?

The thing is, by challenging the RFS on purely economic grounds, the farmers of America have probably let the EPA right off the hook. Because there are some pretty serious questions that need to be asked about what land has been used to increase corn production in the rest of the world, and, within the US, where’s the water going to come from for next year’s crops?